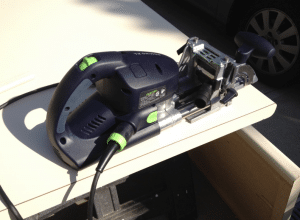 Starting a couple of months ago, Red House was given a chance to test and evaluate the new Domino XL from Festool, an enlarged version of their portable tenoning machine, the Domino. We love the smaller domino so much that we have transitioned almost completely from biscuits to the full tenons used in the Domino system. We carry it in the vans along side the biscuit jointer, but the domino gets pulled out more often. What we really love about the smaller Domino is that it brings back a sense of old world craftsmanship (a real tenon!), but it does it in a fast and extremely accurate way. Suddenly we are able to work with wood from the inside out, building the way I imagine my grandfather would have, but at the pace of a 21st century carpenter. And this same feeling was realized on a much grander scale with the Domino XL. 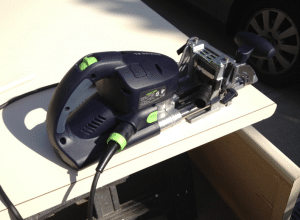 Now, one thing you have to keep in mind is that we are mostly a remodeling company, which means we are in clients’ houses adding trim or paneling, fixing things that went wrong, changing or adding rooms and additions, and occasionally taking on small projects that might consist of making custom doors or tables. Not all of it is made as a show piece, but it is all made to last a very long time. We work almost entirely in the field, setting up temporary shop space in a client’s garage for a week to a month or sometimes in the driveway for a day, then breaking it down.

This puts us in a slightly different category than some of the other testers in our group, but I suppose this is also one of the reasons we were chosen for the test. We set up in the field, but we don’t see this as an excuse for sloppy or sub-par work; on the contrary, at Red House we make a practice of looking constantly for tools and methods that will dial-in and speed-up standards of quality that will stand the test of time.

With our XL, we tested it on a couple of fairly basic projects to see if such a refined and large tool would truly be a helpful addition to the war chest of contractors who need to do good work, but have to do it in the field.

The first project we tested on was a table for a basement laundry. Exciting, I know, but the the job was to replace an existing work bench, which had stood for close to 75 years with something utilitarian, but substantial and attractive. The old bench was too big to come out in one piece, so it had to be dismantled in the basement. This was a process which showed how durable tenon construction really is! In the end we we forced to cut the work bench into several pieces rather than take it apart.

The client had a couple of laminate counters stored in the basement, so these served as the primary counter and the lower shelf. Beyond this, I spend about $45 at the lumber yard for fir 4×4 posts and the straightest 2×4’s in the stack. Our plan was to make four basic 3” legs, which would support two separate apron systems, which in turn hold up the counter tops.

I know I could have bought some angle brackets to hold all of this together, but I also know that in five to seven years, the screws in those brackets will start to loosen. (And I know how seldom anybody makes the rounds in a house tightening up screws.) We wanted to achieve the same kind of longevity as the bench we’d just taken apart, and the Domino XL was like the perfect candidate to get us there. 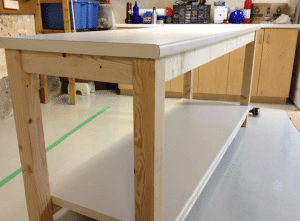 After the milling, sanding, and cutting associated with making this table, Eric, one of our lead carpenters, took about fifteen minutes to familiarize himself with the intricacies of the XL. After that, he took about three minutes to set it up with the proper cutting bit for the tenon we wanted to use. This, and other adjustments on the XL, are very similar to the smaller Domino, so the transition was quite easy. After adjusting the auto depth stops putting just enough of each massive tenon into each part of the apron or leg respectively, and after quick layout, the mortising itself was very quick and dust free. (You have to use a dust extractor with the tool to have it function at it full potential.)

Once all the mortises were cut, the assembly of the new table virtually locked itself together. The size and length of these tenons really takes away some of the fragilty we’ve felt when putting pieces together before. Even when dry fitting this piece, you feel as though you could leave it without glue and it would stand a very long time. With the glue, please don’t ask me to take it apart…

One detail I like a lot on this piece is the way that the apron recesses back from the surface of the leg. It adds a small amount of visual texture to a simple piece, and the Domino XL made it very easy by allowing us to easily mortise into all the apron pieces first, then quickly adjust the tool to drop the mortising bit about 1/4” away from the face. It was a simple and very fast way to add a small touch of interest.

Now with one project under our belts, we tried something a bit more finished. Eric found himself needing to fabricate and assemble french doors for a closet. Again, thinking back to the smaller Domino, we’ve had great success with putting cabinet door together. You hardly need cauls for these cabinet doors because the tenons hold the piece co-planar. Eric wanted to see how the same tenoning principle, enlarged, would work on the closet doors. 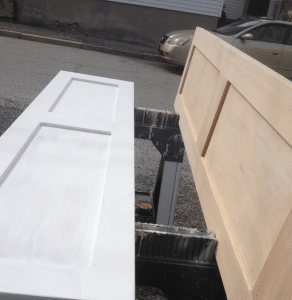 As you can see in the very first picture above, the door was fabricated very traditionally, using dado’d stiles and rails to match. The flat panels are a 1/2” birtch ply which slides into the dado on the stile. Just as with the smaller Domino for cabinet doors, this larger XL proved its worth by vastly improving the structural integrity of the doors even before glue was applied! With the glue, these stiles and rails will be solid and crack free for a long, long time.

In the end, this is not a tool we will keep in the tool kit on a daily basis, but it is a tool we’d like to keep for projects likes these. In fact, next week we are replacing a stile on a historic door on the East Side of Providence. It is an exterior door, and we’ll be using the Sipo tenons and the Domino XL to re-seat and hold the new member into place.

As a contracting company, we come to jobs too often where the finished product was judged solely on how it looked when the project was finished. Then, three or six years later, the true nature of the product surfaces. The finish cracks, or the wood moves, or the joint opens, and we get a call to come fix it. This time from the inside. Looking at building from the end result only is an external, and superficial way of looking at wood work specifically and building generally. If we are, as everyday contractors, to get back to true quality from the inside out, we have to look for ways to achieve that quality without sacrificing too much of the speed that the pace of modern life demands. The Domino and the Domino XL, from our perspective at Red House Custom, are a good way to start on that return path.